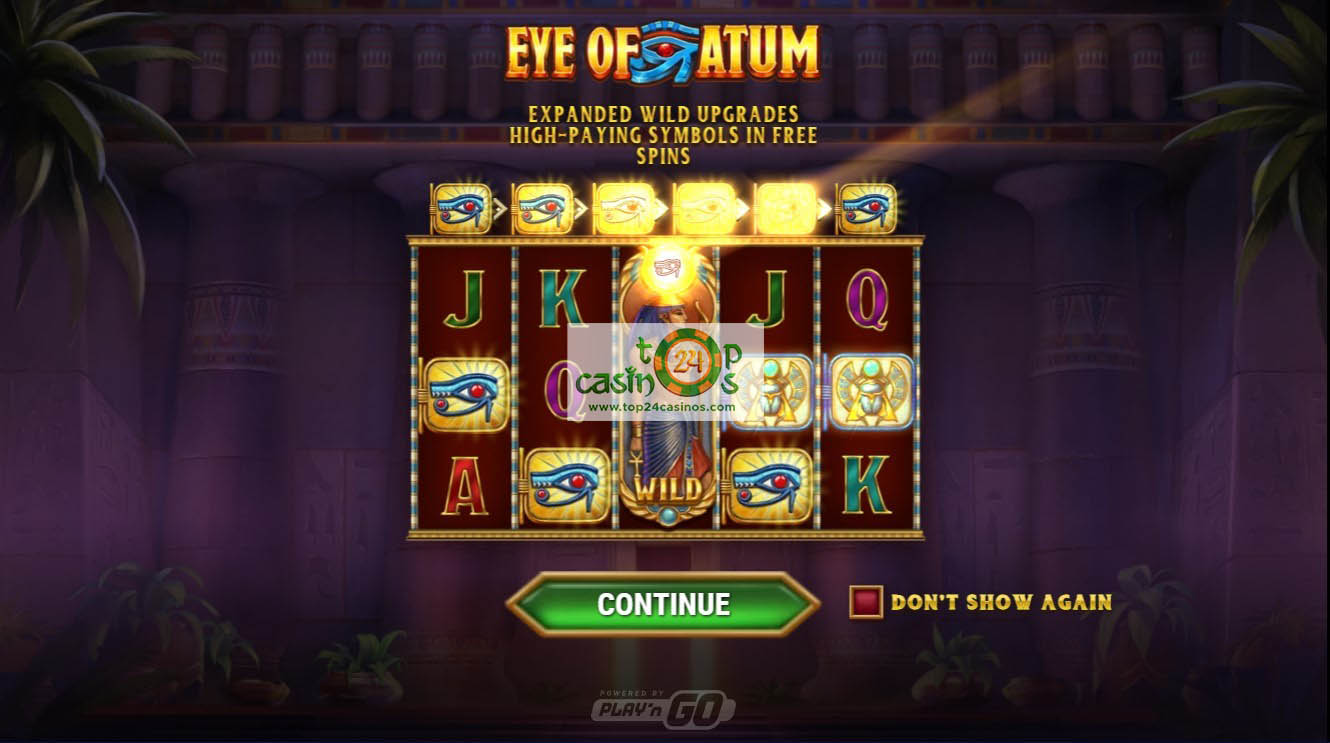 A lot of people are now fascinated by online casino games. They, most significantly, have won the hearts of a lot of casino goers, making them one of the most trending forms of entertainment and recreation today.

Top casino websites offer the best slot games, so players are assured of having the most exciting online casino experience. However, players are advised to see to it that they play at safe gambling sites that are licensed and trustworthy.

There are thousands of online slot games today. We have this article to help players find a game that will suit them. Find out if the Eye of Atum online slot game will capture you.

Looking through the Eye of Atum

The game is based on the story of the father of the gods and Pharaohs of ancient Egypt, the sun god Atum. Ancient Egyptians believed that Atum was the one who created the first divine couple where the other gods have originated from.

Its display, setting, and theme

The game’s theme is Ancient Egyptian. It is set in the era where Egyptian gods and Pharaohs existed and where Egyptian Mythology started. Although it may seem a little plain, it is still as eye-catching s other Play’n GO slots.

The symbols on its reels and the design on its display show what ancient Egyptian civilization was all about. The graphics may not be incredible, but the game can be very exciting as it has features that can increase a player’s winnings. 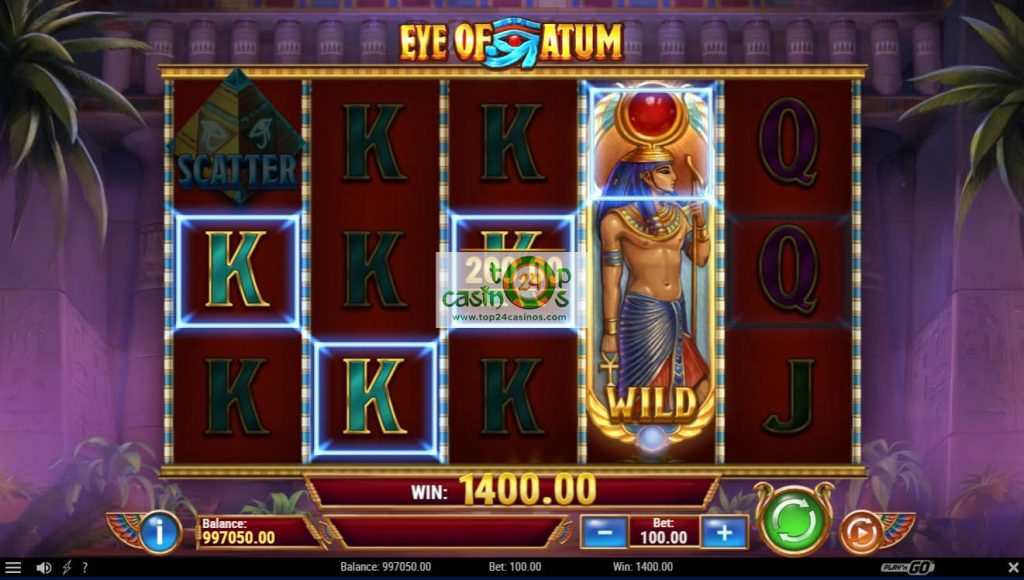 The high-paying icons of this online slot game are the Ankh, the Eye of Horus, Bastet, the Flair and Crook, and the Lotus Flower. These symbols can give a maximum payout up to x50 the player’s bet if they land on winning paylines.

The low-paying symbols of the Eye of Atum are the playing card royals: J, Q, K, and A. These symbols have a maximum payout of up to x10 the player’s bet. Players can win if they land winning combinations on the reels during the base game.

The Wild symbol of the game is Atum himself. This symbol expands when it lands on the middle reels, taking up the entire reel.

The Eye of Atum may have just a couple of Bonus Rounds features, but they can increase every player’s chances of taking home a significant amount. It has the Free Spins feature and the Expanding Wild.

The Bonus Round is activated when the player gets 3 to 5 Scatter symbols on the reels. These rewards players with up to 12 free spins. The Free Spins can give a payout that ranges from x2 up to x500 the bet.

The Expanding Wild feature happens during the Free Spins. The Wild Symbol occupies the entire reel if it lands on the center reels and upgrades the high-paying symbol with the lowest value. Getting enough wild symbols upgrades all premium symbols. Extra free spins are given to the player if 1, 2, or 3 wilds land on the reels. This will provide him with 1, 2, or 5 extra spins, respectively.

A player can get the maximum number of free spins of up to 150 in the Eye of Atum. 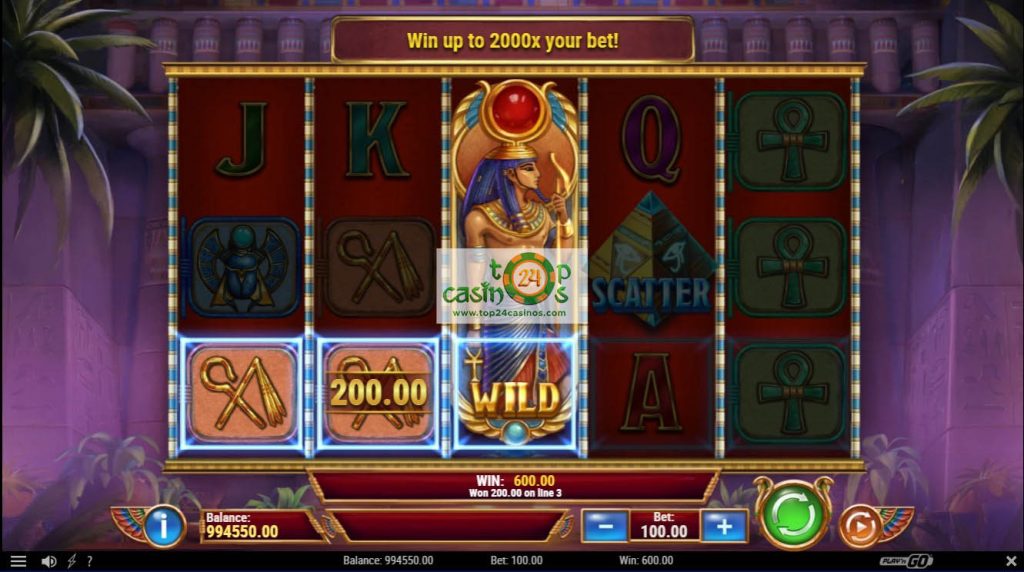 Other information on the Eye of Atum

The game has a decent soundtrack that adds mystery to it. It has simple gameplay, but its expanding wilds and free spins keep players on their feet when these features are activated.

This online slot game is focused on the story of Atum, how he created Tefnut and Shu because he was so lonely. It is believed that all the Egyptian gods are descendants of Tefnut and Shu and that humans were created out of Atum’s tears. Its design is inspired by hieroglyphs, both on its symbols and the background of the display. If you want to increase the game’s pace, there is always the auto spin option.

Finally, it may be concluded

The Eye of Atum can be a lucrative game for players who play to have fun and be entertained. Despite not having a lot of features, playing this online slot game can be satisfying. Its base game is fun, but your excitement will be brought to a higher level once the Bonus Rounds are activated. This game has made it to the roster of the top casinos online, giving players the chance to enjoy the game and bring home exciting prizes.

These couple of games will surely make you enjoy:

Queen of Egypt Exotic Wilds – this game is inspired by the mighty queen of Egypt, Cleopatra. It is centered on Ancient Egyptian civilization, where players can win fantastic prizes. It has an Expanding Wild feature, with Cleopatra herself as the Wild.

Secret of Dead – ancient Egyptian civilization is a fascinating theme for a slot game, making Secret of Dead exciting. Uncover secrets buried by the dead as you dig and hunt for prizes. It has expanding symbols and other features to make your online slot experience full of adventure and fun.