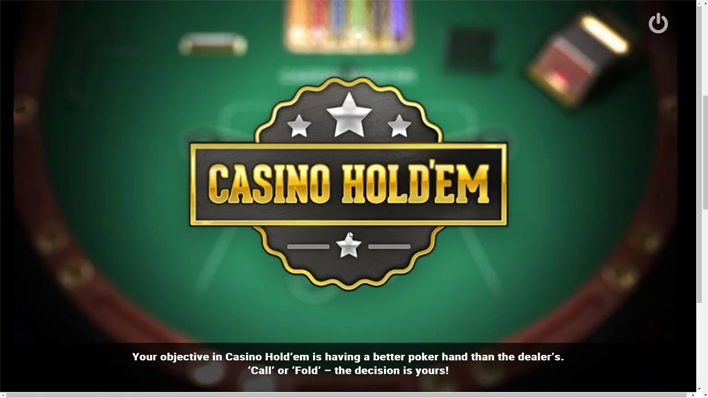 The main objective in casino hold’em is to have your hand beat the dealer’s. As a player, both you and the dealer are given two cards at the start of the game, and an additional five during the course of the game. A standard hand consists of a total of five cards. With their two cards hidden and five cards shared, the highest combination of five out of these seven cards will win the game.

The game begins with an Ante bet. You and the dealer will then receive the first two cards; the cards you respectively get will be hidden from the other player. You will then each receive flop cards, up-facing on the table.

Once you have your cards, you must then decide whether you will fold or raise. Folding will make you loos your Ante bet and end the game. Raising will add another Call bet, double the Ante bet. You will then be dealt another two flop cards. When all five flop cards are laying on the table, the dealer will turn over their cards. Your hand is formed by a combination with two hidden cards and five flop cards. The highest hand will win the game.

You can also make another bonus bet, commonly known as an AA bet. An AA bet first requires that you determine the house or dealer’s Ante bet, and then, in an online casino setting, click the AA circle in which your bet is placed. The AA bet will count your two cards and three flop cards. It has nothing to do with other results, meaning that eve if you lose the actual game, you may still win the AA bet.

When the results are in, there are a number of possible results. A dealer may only qualify with a hand that begins with a pair of 4 or higher. If they do not quality, you automatically win the game. If a dealer qualifies and beats your hand, you lose both Ante and Call. If they qualify and both your hands are equal, all bets will be returned to you.

One strategy that casino hold’em experts advise is to call more often than you fold. Ideally, call 82% of the time and fold 18%. This minimizes your house edge to only 2.16%. Generally, call all pairs, open-ended straights, ace-high or king-high, any flush, or 2 over-cards. Fold when you have low and unpaired cards.

When it comes to betting, try seeing your bet for ante as low as you can. Calling requires you to make another bet worth double your ante bet, and since a good strategy is to call four out of five times, this means you need thrice the ante total. Be careful that you don’t lose the means to call later on in the game. Also, avoid AA bets. These are, by popular opinion, little more than a trap that increases the house edge from 2.16% to 6.40%.

Why play casino hold’em at an online casino with real money?

You can find casino hold’em at almost any online casino that you visit. There are various benefits to playing casino hold’em online instead of at a land-based casino. For one thing, you don’t have to worry about waiting for seats to open up at a full table. Casino hold’em is a particularly popular game, which means there is some waiting time at a packed casino. Here, all you have to do is have an account logged in, and you can start playing immediately.

Also, many online casinos offer various bonuses that you can enjoy in addition to the fruits of the game, with many marketed to casino hold’em players in particular. You can grab the benefits of better wins and better odds from any location, according exactly to your convenience.