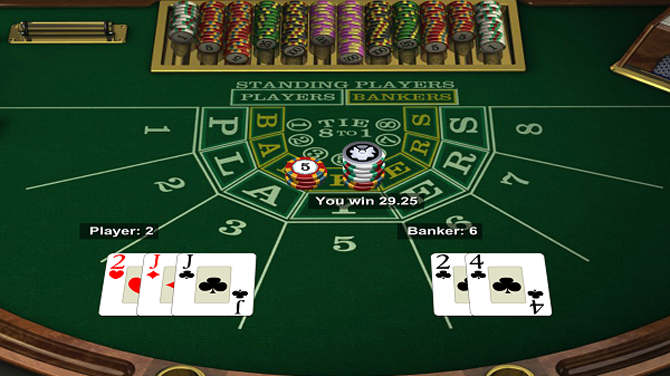 Baccarat online is among the oldest card games in the world. It’s extremely popular in both land-based and online casinos, especially in Asia and among high-rolling gamblers. Though the baccarat game is not that difficult to learn, players need to eventually get used to its rules and flow. The online baccarat game generally follows the same format, so it is usefully to learn the basics before playing online baccarat. Once you’ve mastered basic gameplay, it’s time to decide if you’re ready for real stakes, real money baccarat.

How to play baccarat

Baccarat is also popularly known as punto banco, because it describes the two hands or game sides: the player (punto) and the banker (banco). The game depends on comparing the cards between the two hands. Each round, called a baccarat coup, may have three outcomes: the player may have a higher score, the banker may have a higher score, or the round may end in a tie. The dealer does most of the work in this game.

The gambling part of this game works on guessing the odds. Players can either bet on the player’s win, the banker’s win, or that the round will be a tie. However, there are a number of rules to remember when playing baccarat or making bets.

Online baccarat is played with eight card decks reshuffled after each hand. Four cards are dealt in total, in equal numbers to the player and banker.

In baccarat, a shoe is the box in which cards are held and dealt. A player or bettor who holds the shoe will take a card from the box and slide it facedown to the dealer. The dealer will then give it to the bettor who has the largest wager. The following card becomes the banker’s first hand, and this card is placed next to the shoe. The dealer will then alternately distribute a card to the player and banker. Then, they will turn the cards face up and announce the total number of points. There are some other things a player or banker must do, with rules according to the hands that they end up with.

The value of cards in baccarat is as follows: all cards from two to nine have face value. Ten, jack, queen, and king are valued zero. An ace has the value of one. The hand closest in total to nine is the winner. Betting on a winning player will double your bet. Betting on a winner banker will earn you 95% of your wager. A bet on a tie pay off at 8-1, but this type of bet will usually impose a 9.5% house edge and is generally avoided.

At some points in a game, a player or banker must stand depending on their card. Players stand on a total of 6 or 7. 8-9 means a natural, which means they will stand as a win. For totals less than this, they will keep drawing.

However, it is important to remember that while these are the general and most common rules, there may be new variations introduced in casinos who want to shake the game up a bit.

Baccarat is primarily a game of comparison and guessing; like all card games with a set deck, the logic of probability can be used to your advantage. Considering the odds, bankers have an edge, with just a bit more than half the odds in their favor. This gives the house a 1.36% edge on player bets. However, this means the house will solicit 5% on successful banker bets.

Baccarat is very likely susceptible to card-counting. However, online casinos that incorporate RNGs into their dealing systems are given a better chance at counteracting cheating.

Money management is crucial to baccarat, precisely because it is so dependent on luck. Do not make any wager than your funds cannot handle, and do not increase your wagered amount when you lose. Learn how to walk away with your winnings, too.

For most bettors, especially those who are new to the game and its strange format, the popular choice is usually to bet on the banker. However, keep in mind the 5% commission that the house taxes on banker bets. The strategy is usually to go with the banker, until such a time that the banker loses. When this happens, wait for the next decision instead of jumping straight into the next bet. If the player begins their streak, it is widely suggested to ride that wave instead, as player bets do not have the commission problem that banker bets do.

Avoid the tie bet as much as possible, as it only has a 9% chance of paying off. Its house edge is at an estimated 14.4%. This means that for every 100 units that you bet, you lose 14.4. Most of the time, this bet means money lost, and should only be placed if you are, for some inexplicable reason, entirely certain that a tie is going to happen.

It’s also good to canvass thought the available tables. Sometimes, other tables may have lower commissions for banker wins, increasing both your odds and wins. Another important tip is to avoid the instinct to search for patterns. Tables keep track of game results and do their best to avoid predictability. Regard each hand as a separate occurrence.

Why play real money baccarat at an online casino?

Playing baccarat at an online casino has a number of benefits that land-based casino baccarat does not have. One of the best benefits players can enjoy are the bonuses that online casino games real money often offer. These bonuses are a great assist towards winning the game, and can use bonuses to overcome adverse outcomes. Sometimes, special bonuses are specifically made for baccarat.

There are also a number of baccarat tournaments that anyone can participate in from anywhere in the world. These tournaments are entertaining and often very lucrative, with real money rewards waiting for you. Also, if interaction with a dealer is important to you, you can participate in baccarat that has a live dealer running a game. Online baccarat gives you the benefits you would find when you step inside a brick and mortar casino, and much more.